There was a time when you would have to trek down to Argentina in order to see a colony of Quaker Birds. It would be an adventure and in return you would see these fascinating birds living wild in social and communal societies. Unlike other parrots, they do not live in Jungles, these birds live in the wide open Savannah and areas containing light woodland. They can survive in temperatures as low as -27º and build nests that weigh as much as 2,600 lbs!. These nests are cooperative ventures built by a number of parakeets and are something on the lines of an apartment block where each pair has its own door and rooms within the greater nest.

If you really want to see Quaker birds in a truly natural environment, then there are many companies in Argentina that offer Bird Watching Tours and I imagine that if you asked for a special tour concentrating on these birds it could be arranged. However, even in their original native environment they are considered a common pest. You may get some strange looks, as it would be very much the same if an Argentinian came to the USA and asked for a special tour based around pigeons .

These days there is no need to travel that far as you may have a colony of Quaker Parrots living in your locality. In Brooklyn there was a nest so large it almost completely circled the spire of Greenwood cemetery at one stage, housing a large number of birds.

The Quaker Bird – What is it?

The Quaker Bird (aka Monk Parakeet) is a small parrot which is bright green, with a pronounced grey breast. The abdomen is a greenish-yellow color. The average lifespan of a Quaker parrot is 15 to 30 years. It originally came from Argentina’s temperate/subtropical areas together with adjacent South American countries.

The Male Quaker Parrot is typically 11 inches long and a 19 inch wingspan. The females will be between 10% to 20% smaller. Their bill is orange and they have a very loud call. When kept domestically, other colors have been produced and some of these may have escaped into the wild, but because they are not so camouflaged they will not survive as long as standard colors.

A unique thing about the Quaker Parrot is that it is the only parrot that builds a stick nest. Other parrots and parakeets will typically use a hole in a tree. The parrot is very social and will frequently build communal nests, with each pair having their own entrance. Another unusual trait of the Quaker Parrot is that they may have a helper, often a grown offspring, that will assist the pair in feeding young. 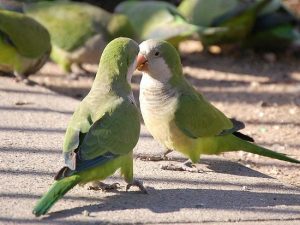 Where to See Quaker birds in the Wild

You can choose to travel down to Argentine or one of the surrounding countries if you want to see Monk Parakeets (Quakers) in the wild. Far easier to choose one of the large colonies that abound in the USA.

One of the biggest populations of Quaker Parrots is in Brooklyn. You may be wondering why Brooklyn of all places? Apparently some time back a large shipment of the birds accidentally got released at JFK International Airport, and they eventually landed in Brooklyn, decided they liked it and stayed, becoming real New Yorkers and spreading to Queens, The Bronx and further. Why do they not go to Manhattan as well? Brooklyn and Queens have utility poles carrying electric cabling, Manhattan has underground wires, and since the birds nest on the Poles keeping warm, they prefer Brooklyn.

In actual fact the reason so many were imported to the USA was that Argentina had tried to eradicate them and when that proved too expensive they caught large numbers and exported them to the USA, thereby making some money on what previously had been a problem.

One location that used to be famous for its large population of Quaker Parakeets was Hyde Park in Chicago. For more than 40 years they have lived in the park and quite a population developed. Then suddenly the numbers began to fall and nobody knew why. Eventually they found out is was a result of a program to reintroduce the Peregrine Falcon into the wild in the region. The Peregrines soon discovered this wonderful source of food in Hyde Park and eventually the remaining Quaker Birds fled.

Florida has the largest population of Quaker Parrots in the USA. An estimated 150,000 and 500,000 feral Quaker Birds live in the state, despite the utility companies’ effort to destroy nests. The huge number of bids has become a major problem for local utility companies who now employ staff to destroy nests they find on transformers, poles and other electrical installations. Some of these large nests built by the birds have become wet in torrential rain, then collapsed onto electrical connections and caused power outages. In fact, they have caused nearly 200 outages so far. 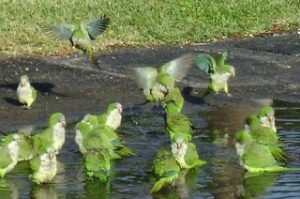 Wild Parrots in the USA

There are a variety of attitudes to feral populations of Quaker birds in different countries and states of the USA. Some jurisdictions see them as a pest and eradication programs have been launched, while other places are fairly ambivalent about them. In Europe, initially the populations were seen as harmless and no actions were taken about them, but some countries, particularly the UK, are now planning to eradicate the wild population.

In the USA there is a variety of attitudes. In some states Quaker parrots are illegal. They may not be kept as pets, in case they escape and join wild populations. In other states they remain legal.

The problem with wild populations is a fear that they will damage crops and complete with native bird populations. Quaker Parrots are very social and with communal living they tend to breed fast and small populations of escaped pets can very soon turn into large colonies of intelligent birds, that soon adapt to the local habitat.

How do Quaker Parrots Adapt so Well in the USA?

Because the breed is originally from a temperate region, they were more suited than tropical parrots to survive in the USA. They are also very intelligent and often build their communal nests near or on heat producing devices. It is not unusual to see nests on top of electrical poles that generate heat.

They arrived in the USA in large numbers during the period 1960 to 1980, imported as pets. Many birds escaped or were intentionally released by owners and by the beginning of the 1970s they were established in seven states. Just 15 years later they had spread to 15 states. In just Florida there was an estimated population of between 150,000 and 500,000 feral Quaker Birds.

Colonies are surviving as far north as New York City and Chicago.

There are conflicting views on how welcome Quaker Parrots should be. At one end of the range of opinion is a case in Brooklyn, where the birds set up home in Green Wood Cemetery. Originally ground staff tried driving them away and destroying nests. Still, then they discovered that the Parrots were scaring away pigeons who had been damaging the stonework. The Parrots caused no ill effect on the stonework. The cemetery management has welcomed the parrots as a natural way of preserving historic structures. Brooklyn college has also got many birds living on campus and has adopted one as the college mascot. They can also be seen nesting on lamp posts in the Bronx. You will also find them nesting on lamp posts in Queens.

What is the Problem With Quaker Birds?

Many people see them as an invasive species and, on that basis feel they should be controlled. This problem that really stems from between 1960 and 1980 was bound to occur with many birds being imported into the country as pets. Some were sure to escape and some would be released intentionally when owners no longer wanted them.

Not all states are opposed to Quaker Parrots, but those who say that the birds eat grains, plant buds, and fruit do damage to crops, which can hit the States’ economy.

Risk to the Environment

When large colonies of Quaker Parrots get established, they can compete with local species for food.

The risk to public utilities

These birds have a habit of nesting on utility poles, transformers and substations. They constitute a fire risk and can cause power outages. 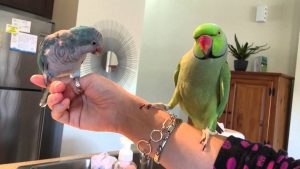 These parrots are brilliant and social. They are swift to build vocabularies of human words and have overtaken Cockatiels as a pet purchased for talking abilities. They are also much cheaper to buy and have a shorter lifespan than many other parrots. Domesticated Quaker birds have been bred in other color variations which sell at higher prices.

It is really the personality of the Quaker Parrot that qualifies it as such a good pet. They are real homemakers and try their best to build a home and keep it. Even though most aviaries are not big enough to house the kind of multi-occupancy apartment block they favor, the Quaker will still attempt to make it happen and do their utmost to create the desirable home they seek.

They are generally mild-mannered and friendly birds, but they may become territorial regarding their nests and even the cage itself. They also have a love of possessions, and when let out in the house, they will attempt to collect objects to layout inside their cage or use in the construction of a complex home inside the cage.

If you are considering having a Quaker as a pet, they do best in homes that have a lot of time to devote to them and be the center of attention. They will interact with the family as much as you let them, but they also need some time alone to sleep. Tired Quaker birds get cranky.

The downside of a Quaker Bird Pet

Like all parrots, they can give a painful bite if provoked. They can also be noisy. If they want something and fail to give it to them, they will make a repeated noise until they get it. If a bird is spoken to at an early age, it will start to mimic human sounds from as early as three months old. The problem is that not only will they mimic speech, but they will so mimic sneezes, coughs, and breaking wind, which can be a bit embarrassing. They are choosy and will not automatically get on with another bird placed in their cage. They may decide to be friends, but equally, they may become sworn enemies.

This bird is not stupid, and an inexperienced pet owner can find themselves dominated by a Quaker Bird.

The Quaker Bird has successfully invaded the USA, UK, and many other countries. They are now very common across large areas in the USA. Whatever your attitude to them, the fact is that they are here and are not going away anytime soon.

So in answer to our original question “to See a Quaker Bird on Your Next Vacation Where Should You Go?”, the answer is to open the door and look for many people. If you really want to see larger numbers, I suggest heading down to Florida, Brooklyn, or Chicago.