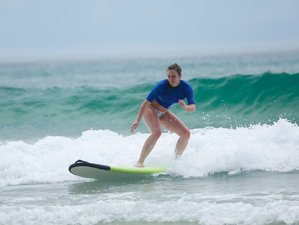 Surfers are not exactly the first thing that springs to mind when you think of Australia, being more associated with the grisly mutter of the back of a surfer than the tropical sun and blue waters of this sunny country. Yet, stand on a beach in Australia and watch a wave break, and you will realise that municipal authorities have been somewhat lax when it comes to cleanliness.

Taking a school trip to Surfers Paradise will put your students face-to-face with one of the prime attractions of the Australian coast, and will be a great way to assess the effects of pollution on our beautiful country. The famous boardwalk, which has established itself as one of the world’s great surf breaks, is in stark contrast to the smooth waters of the bay; but is well worth the visit. The tourist resort of Brighton more than provides ample opportunity for a close-up examination of nature in its rawest form.

Most visitors are keen to learn more about the environmental issues associated with tourism, and most will have little to worry about when they are surfing and swimming in the famous Brighton beach. However, a closer look at the local coast will reveal a land of untamed natural beauty that is anything but smooth.

Most accommodation establishments along the coast are old seaside homes rather than hotels, and these can be found in places such as swimming beaches rather than resort hotels, so you will need to take care to find a place that offers the right balance between luxury and keeping noise levels low.

Beach access should, therefore, be strongly considered. Dolphin, abalone and whale watching and guided snorkelling trips are among the worthwhile activities offered, and taking a kayak tour of the coast is a great way to get close to the marine life that calls the Western Australian waters home.

A spot of beach walking will also ease the minds of students. Wandering the sand and fields of sunflowers around Mile End Park after a surf lesson is a wonderful way to spend the day, and spending the night in Montague Island will allow students to see the real Australia in its raw nature. Many of these activities are seasonal, so your students can taste it from the season they are visiting while others are available year-round.

The impressive Kakadu National Park, just inland from the city of Brisbane, is a driving holiday destination. The parks is the largest single catchment area for migrating birds in the world, and boasts the highest number of breeding pairs of Purple Heron (Gyps fulvus) outside of their native Australia. In the park you will also find Oyster-rubs, Mountain Oysters and evolve Acacia Bund Gumbo, and so much more. You can even go bush walking in the area.

The Maritime Museum is in the old Customs House in Tasmania, which is now home to the Risso’s dolphins. The display is designed to showcase Australia’s most beautiful and important sea and marine animals, along with their habitats. You can explore the exhibit in a combination of scenes from the Australian Maritime Adventure, as well as the planned displays of Australia’s five fleets. The museum is built around a giant Tea Pot, and is a fascinating excursion.

The Queensland Aquarium is the largest in the country and is located in the Innes Waters region of the city. The aquarium contains over 50,000 sea animals with 300 tanks containing 500 individual aquariums. You will be captivated by the look on a newly-restored exhibit calledauntiet, which is as bright as the South African coastline. The aquarium uses computerised aqua-site technology to project images and audio into underwater natural surroundings.

While in Brisbane, why not make a trip to the Margaret River tropics in order to explore the Canberra River Valley? The botanical gardens are associated with the University of Queensland. They are considered one of the nations best botanical gardens, as well as being the third largest in Australia. The gardens are spread over 11 hectares of land and include a popular icon, Lipsy’s Lookout.

The botanical gardens are often filled with tourists and are therefore very easy to find. After arriving at the gardens, just follow the signs to the Reston Planter station for easy directions. The gardens are open daily from 5am to 11pm, in season, and closing time will usually be at 5.30pm.  Their gift shop is spectacular.  You can even shop handbags there.

Cox and Whale Bay offer visitors historical adventures with a contemporary twist. The former days of whaling are remembered at the Captain Cook Statue, situated at an old settlement, museum and sea fort, five kilometres out from the main part of the peninsula.